One interesting thing about my C++ course is that the instructor never specified which standard he is using for the course. There are many standards in the C++ universe, and they don’t all have the same functions.

Originally, when I attempted to build my game without specifying a standard, it failed to build. So a little research led me to an article that gave me the idea to try the 2011 standard by adding “-std=c++11” to my build script. Since that worked, I erroneously thought that the course must use the (now old) 2011 standard instead of the newer 2014 or 2017 standards. Turns out I was wrong.

By default, my compiler will compile with the 1997 standard. How do I know this? Well, try this command:

Here was the output:

Then, watch what happens when I specify a standard to use:

So, when I specify a standard, it uses that standard, when I don’t it tries to compile with the 1997 standard, which is really outdated! I’m not sure why they set the default to such an old standard. Obviously, my compiler is new enough for the 2014+ standards: 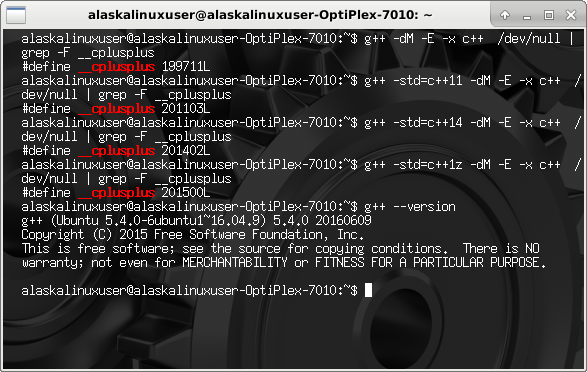 In any event, it would appear that my course can compile and run just fine on the newest standard available to my compiler, so the course material must not be that old. However, since it will fully compile on the 2011 standard, it must have been written before 2014, or not use any of the 2014 functions.