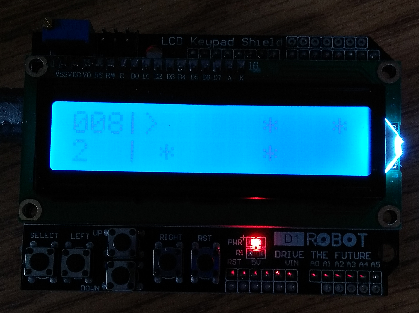 I wanted to post a video, but sadly the free version of WordPress doesn’t allow this. So, you can click here to watch the video of me playing “Asteroids Game!” on my Uno with the LCD Keypad Shield. Sorry for the low quality of the video, but I’m sure you’ll enjoy it all the same.

The game is complete, and you are welcome to head over to my GitLab and download the ino file and compile it yourself. Remember, you will need the LCD Keypad Shield library as well. Some stats about the game and program:

Also, the entire game is programmed in less than 600 lines (would be significantly less without all the explanation blocks I put in there), and the ino file is less than 20 kb!

One of the biggest parts of the game is making sure that the asteroids show up in a random fashion. With only 4 asteroids, it is important that the pattern is not discernible by the player, or they will easily be able to win over and over again. Here is how I called it:

I am calling the “get_random” function with an integer (in this case) of 4. That will make more sense once I show you the function:

You see, computers can’t actually make random numbers, so you have to “seed” it with something to grow a number from. As a “seed” I input the time in milliseconds that the game has been running. From this it makes a “random” number from 1 to 10. It then adds 10 to that number to place the asteroid off of the screen, giving the appearance that it existed before and slowly came into view.

The problem is that sometimes the game loop runs fast enough where two asteroids are asking for a new random number at the exact same time. If they do, they will both receive the exact same “random” number. This will cause them to “overlap” or be in the same physical spot, which means that they will both go off screen at the same time, and request a new random number at the same time, receiving the same “random” number again. It’s a loop.

To solve this, I added the integer “addOn” to the milliseconds to make a new number. This “addOn” number is passed with each asteroid, and each one has a different number, creating a new instance of “seed” for the random number generator. That way no two should return the exact same “random” number. Although it can still happen.

Just like rolling two dice can sometimes give you the same number, the random function can still randomly return the same number. The smaller the number pool, a six sided dice would have a pool of 6, our game has a pool of 10, the more likely a repeat of a random number happens.

Another case scenario is when asteroid one, for say, goes off screen, while asteroid two is 2 steps behind. Asteroid one gets a random number of, let’s say 6, which added to 10 makes 16. Now the asteroids move. One is 15, two is 1. Then one is 14, and two is 0. Then one is 13, and two falls off screen, getting a new number, which randomly could be 3, which, when added to 10, makes 13, and the two asteroids now occupy the same space.

A programmer could add a check for this, and if the asteroids are in the same space, cause a new random number to be chosen, or add or subtract a number to it, but in this simple game, it happens so rarely that it isn’t really a problem. The player just gets a bonus when those two asteroids pass next time.

Either way, I hope that you have enjoyed the game itself, and more so the creation of it. The game is open source and feel free to put it to good use!