As an open source developer of simple Android applications, I can’t tell you how ecstatic I am about a new website: MechDome  (https://www.mechdome.com/). Finally, a one stop shop to turn your Android app into one that can be used on iOS devices, in minutes!

Can this really be? Is it really that simple? Drag and drop your Android apk file into their website and it spits out an iOS application? Well, I decided to try it for myself, and I’ve devoted this entire post to my experience.

TLDR: MechDome ROCKS! It successfully converted my opensource app: Hourglass, into an app for iPhones. If you are an Android developer, you should head over to MechDome right now!

Still with me? Great, then here are my thoughts on MechDome ….

The MechDome website is intuitively laid out in an informative and well thought out manner. From the opening page you will see all the information you need to get started, as well as informative placards telling you what MechDome will do for your app, namely convert it from a native Android apk to a native iOS application. 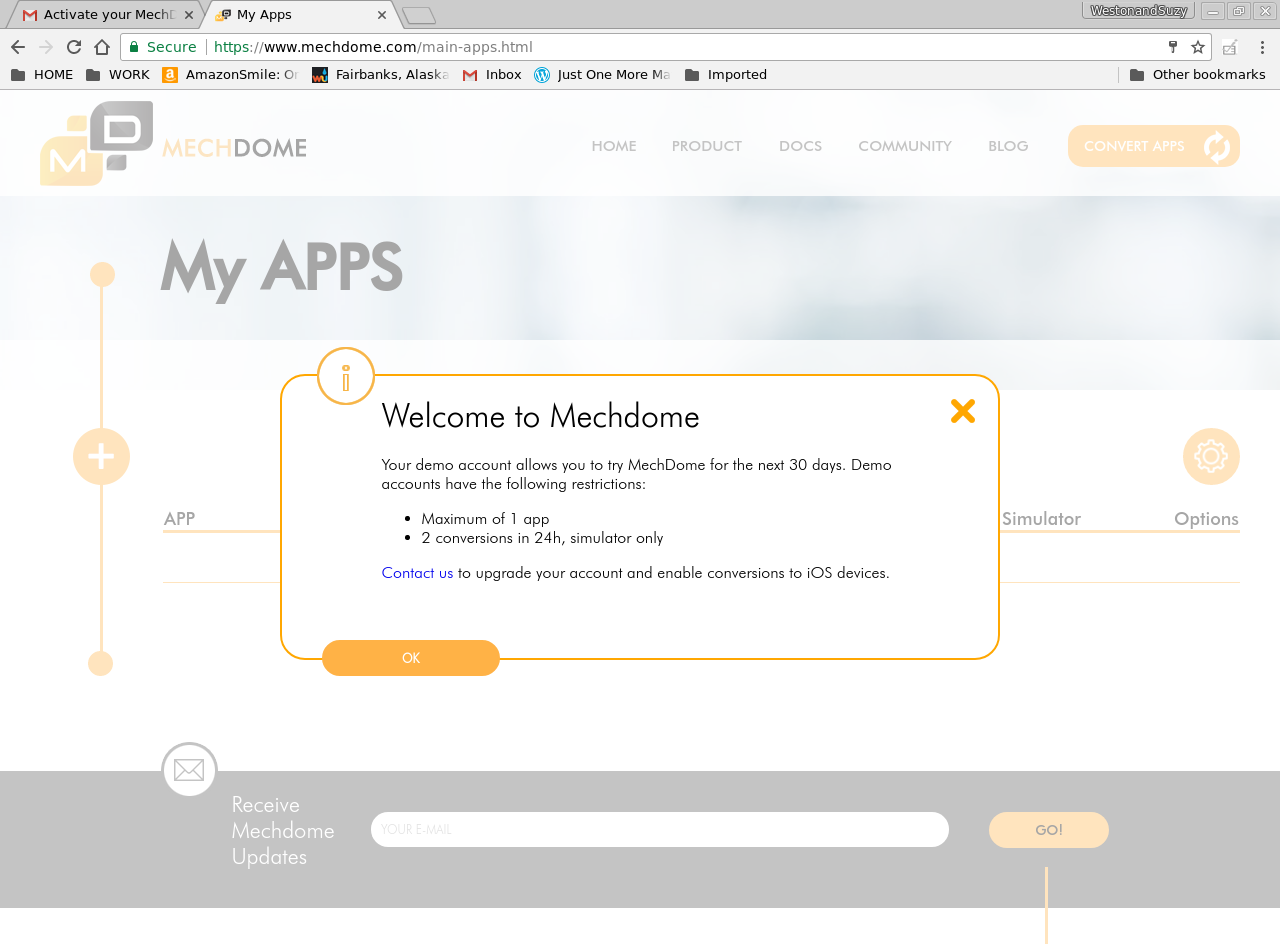 After clicking “Create App” at the top, you are asked to sign up for an account. The process is clean and intuitive, and I really liked the color scheme. Perhaps one of the best features of the website is the modern user interface and clean look.

I also tested the website out on my cell phone, and it worked beautifully.

Within a minute I had my app uploaded and was ready to test out this process. You have a couple of options about Firebase or Google ads, etc., as well as the option to use a custom icon. I think the choice to use a custom icon is great, as you may want something that looks more “iPhone-ish” or something to differentiate between your Android and iOS applications visually. After choosing your options, press save.

Once your settings are properly set, all you have to do is click the Simulator button. Presumably, when they open up the options to go to the Apple store, you can simply press the iOS button instead, but for now, free accounts are only able to upload one app for the simulator.

This is the only “problem” I saw with the website. After clicking the Simulator button, the button starts spinning, but there is no sort of progress report. After a while of waiting I ended up closing the browser, opening the page again and found the button still spinning, so I left the screen to do some research. After a few minutes, however, I received an email telling me that my app was ready for download.

So if you convert an app, after clicking Simulator, you can go about your business knowing that an email will be sent to you when your app is ready. That is really convenient. I do think the website should indicate that, though, after you click the Simulator button.

I tried this twice with my two email accounts. The first app I tested was done in a few minutes. The second app I tested was not done for several hours. Both of the apps were about the same size, albeit one was a little more complicated than the other. 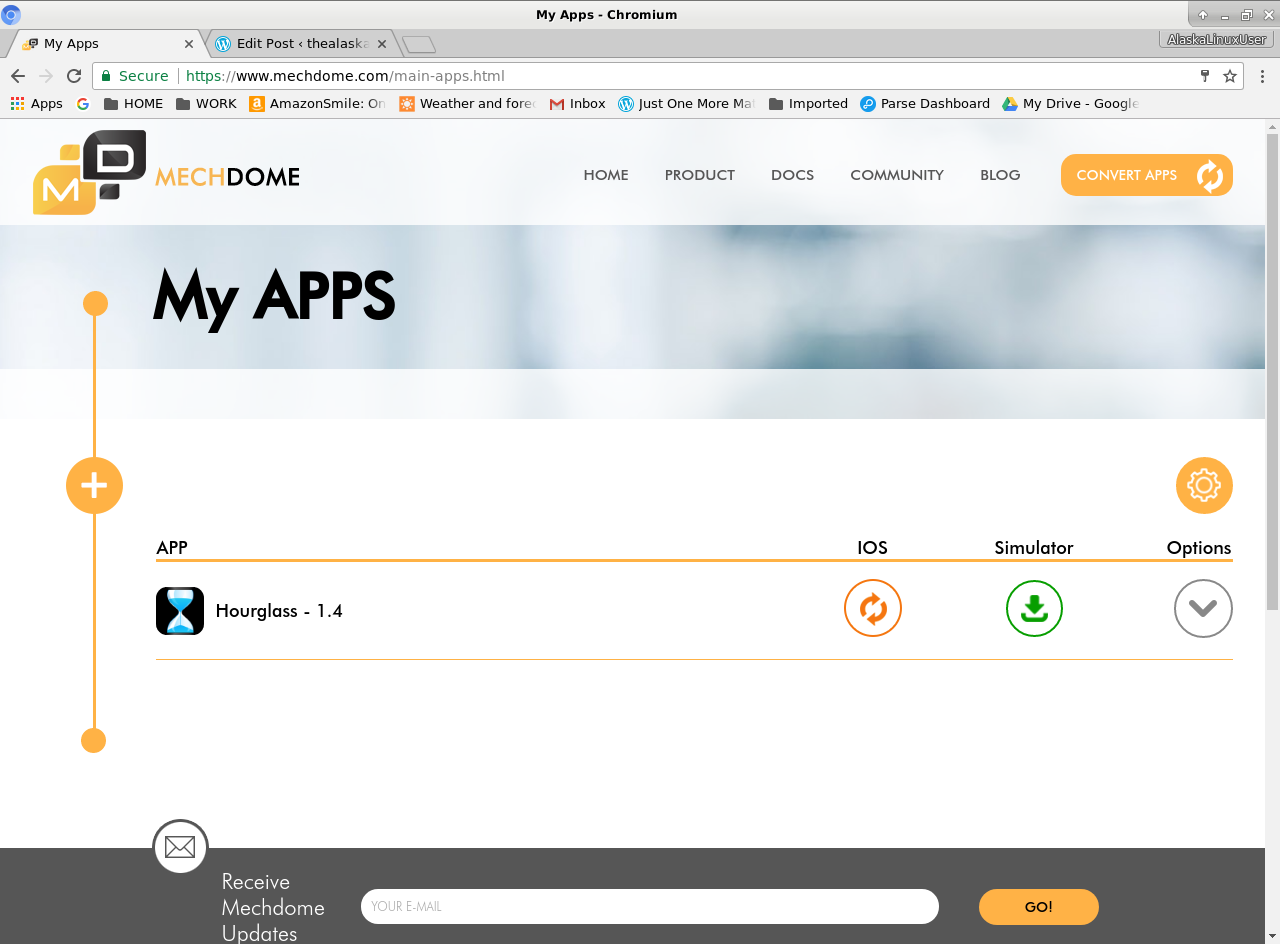 A quick tap of the download button and I had a shiny new zip folder on my hard drive. Simple, short, sweet!

It actually took me a while to get the hang of how to use an Apple computer so I could test the app that I converted. Since that is a bit of a rabbit trail, I will save that for the next post. Here I will just talk about how well the app conversion worked.

As I said before, I used my two email accounts to “cheat” and use MechDome twice. Currently, free accounts only get one trial download/conversion for simulator use only. Both apps that I tested did work rather well, so I will only discuss the open source app that I tested, which was my Hourglass app, available on F-Droid and the Google Play Store.

Here’s a few screen shots of my app in iOS action:

Overall the app worked great! It looked pretty close to what it looks like on Android, and as far as I could tell, every part of the app, every button, every slider, etc., worked flawlessly.

Notifications, however, were a bit different. Not wrong, just different. First, as you can see in the slideshow, I was prompted to ask if I would allow this app to send notifications or not. Choosing yes allowed the notification to pass through, and you could see it in the notifications bar, if you pull the bar down. When the timer on the app reaches 0:00, it is supposed to have a popup to tell you that your timer is up, but that didn’t happen. If the app was open, then that would transpire, but not if the app was closed. However, the sounds still played, so it seems to still function great as a background timer.

The other app I converted was a customer feedback type of app, which was not open source, so there are no pictures of it here, sorry. An interesting note, it used parse extensively, and seemed to work flawlessly. This proved to me that parse, networking, and intents were working great! The only oddity was the color of the “stars” for the ratings. In the Android version, the stars were orange/yellow, but in the iOS version, the stars were an odd gray color. Still functional, just a bit of a visual oddity. Overall, I was really impressed. Two thumbs way up from this Android developer!

I exchanged a few emails with the MechDome staff and was really impressed by how quickly they responded, as well as their professionalism, enthusiasm, and helpful attitude. In those emails I asked them about general pricing and open source development. They have not publicly finalized any pricing options, but it sounds like they plan on a tier subscriptions. Perhaps those who do multiple apps, or apps of a certain magnitude will fall under larger “tiers” and be charge extra.

These sort of things are probably best left to bean counters who usually handle this thing, but here are my thoughts on how to best support open source development:

But, if there was a one time fee (like there is to get a Google developer account and put apps on the Play Store), or a free account with limited use for the open source developer, then I would be all in! Obviously, any account that used the software improperly, to convert closed source materials for free would need to be prosecuted, etc., but that is something I’m sure MechDome  is already looking at from a legal standpoint.

These are just my thoughts, and they do not reflect MechDome‘s opinion on the matter, as that remains to be seen. Hopefully they will consider the open source community and help it thrive by allowing some sort of use of their conversion software, because MechDome has proven to me to be exceptional when it comes to quality and customer service so far! Now all we have to wait on is their pricing.

In the mean time, head over to MechDome and try converting an app yourself! It works great! If you have trouble running that app in the simulator, be sure to check out my next post!

P.S. I don’t want to sound like a broken record, MechDome is not offering me any special deals, payment, or benefits to write this, I just really liked my test run of their conversion software on their website.

appappsconvertiOSmechdome
By AlaskaLinuxUserJuly 3, 2017Android, source2 Comments on MechDome: Run your Android apps on iPhones and iPads!

2 Replies to “MechDome: Run your Android apps on iPhones and iPads!”