Fool’s Mate Friday is going to take a little detour, as I work on learning a new programming language.

If you have followed my blog at all, you will notice that I’ve made a bit of a shift away from Android. When I was working with Android, I was heavily invested in Java programming, both for games and app, as well as making custom ROM’s. I’ve come to realize though, that while Java is cross platform, it is a bit of a niche these days.

Java is used by Android, but rarely used by other computer operating systems. True, it CAN be run on just about any OS, but usually ISN’T. Most browsers have dropped Java applet support, and most OS’s don’t include Java support without installing some form of JRE (Java Runtime Environment).

As I’ve switched (at least temporarily) from Android to Ubuntu Touch (UBPorts), I’ve seen a real need for more robust apps for that platform. Unfortunately, UT doesn’t support Java natively, and that left me out in the dark.

But, God gave us brains, and I’m always trying to use mine to learn new things, or master things I already know. So, I’ve decided to take up a new programming language. Obviously, if you read the title, you already know that I picked C++.

It can be hard to just “learn” something new by reading a book, or looking at code. One of the things that helped me a lot when learning how to make Android games was to sign up for a class on Udemy by Rob Percival. He made the course fun and dynamic by making little creative games or applications to teach the student new concepts or ideas. With that in mind, I jumped back on Udemy and snagged a course (during the $10 site-wide sale) called “Beginning C++ Game Programming“. It focuses on teaching a complete noob how to program in C++ by creating 3 simple games.

One of the perks to this programming style is getting to see something get created from start to finish, and have a graphically playable product when I’m done. It uses the SFML library (which sounds like a dirty acronym, but really is an open source library – Simple and Fast Media Library) for handling the graphics, and it seems to be really intuitive and straightforward. It also seems to be very similar to using libGDX that I was using with Android, so that make working with it easy for me to learn.

Since Java and C++ are both object oriented languages, the concepts of each are the same, which is helping me in the learning process. Although I still try to type things the Java way, so that may take a while to get used to. Either way, I’m having fun with the course, and while I’ve only completed about 15% of the course, it has been interesting and fun. 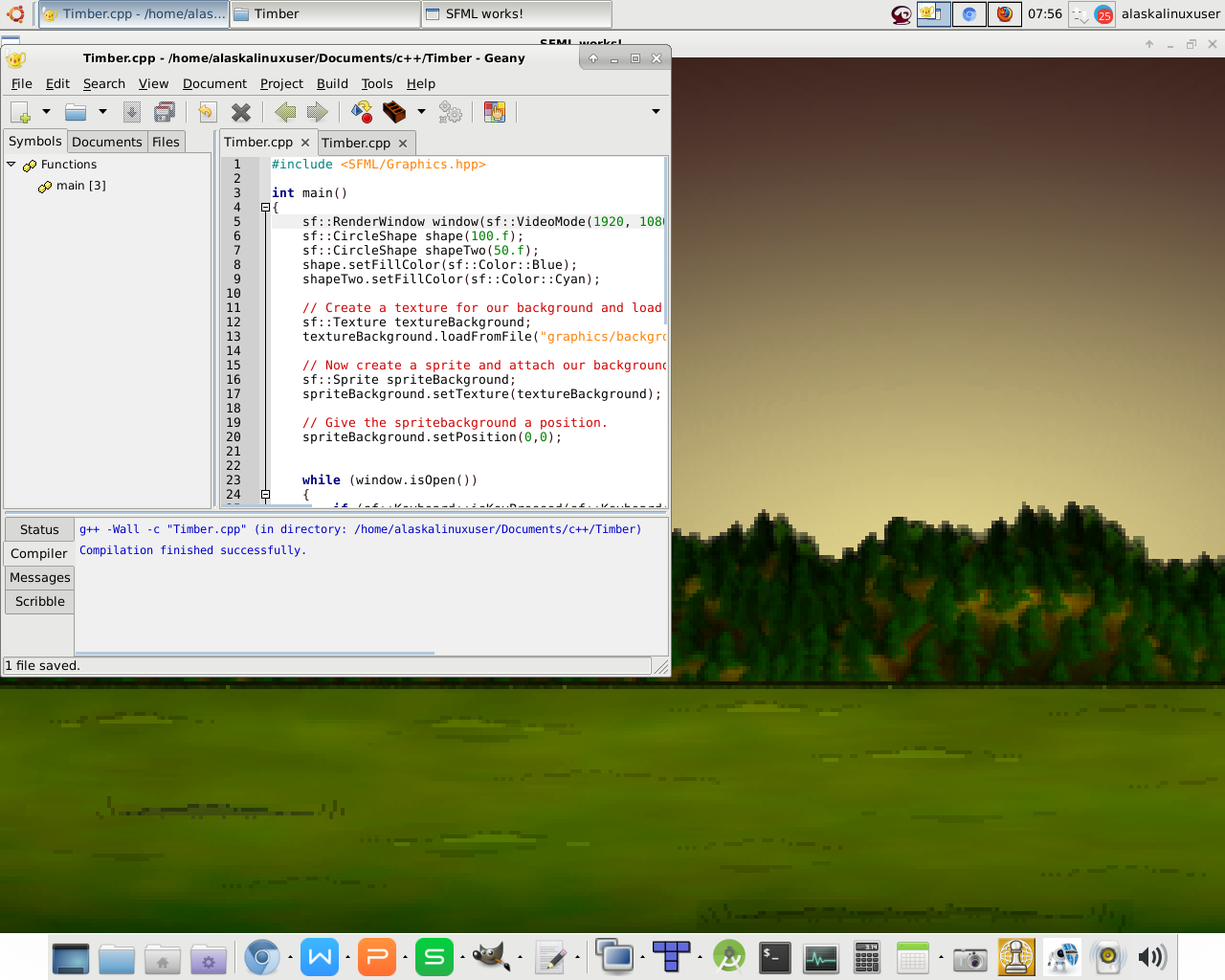 The course does use Microsoft Visual Studio, however, I’m just using Geany to type and compile my programs. Other than one or two little snags about include files being different from Windows and Linux, I haven’t had any trouble doing things my way. Hopefully you’ll enjoy hearing about the journey!