Okay, so this might sound like some kind of gimicky advertisement, but it’s not. I work on custom ROMs for various cell phones, and it is becoming a bit difficult to keep swapping my sim card around to test them all out. The prospect of paying money for a second sim card that I will barely use any minutes/data/texts on is not on my agenda, but I’d be willing to use a free sim card for sure!

As you probably heard, FreedomPop is offering “100% free service”. So I thought I’d put that to the test with a phone that is not my daily driver. I checked their website, and supposedly, they have service anywhere AT&T does, which includes Alaska. I picked up one of their sim cards and here is what my experiences were.

Activation was really simple and straight forward. Note that I picked up the sim card from a third party, so it was not activated yet. I guess if you order straight from FreedomPop, they will activate it as soon as you call, then send it to you. I didn’t want to do that because I was concerned about “extra” charges and setup. See, most of their deals start you signed up for more, then you have to downgrade to free. Usually there is a time period before you get charged where you can downgrade. I was concerned, because their website uses free shipping, which takes up to 14 days to Alaska, which coincides with when you get charged for non-free services. So I picked up the sim card from a third party and activated it myself.

After unwrapping, there were instructions to call or go online to activate. I HIGHLY RECOMMEND GOING ONLINE so you don’t get confused or bamboozled. During the online activation, it will ask you numerous times which plan you want. You have to constantly check each page and make sure you click the “Basic” free plan.

You will need to provide a credit card and $11. One dollar is the activation fee. The other ten go into a “top up fund”. This top up fund is in case you run out of time, then you can automatically use the money in your top up fund to purchase more data/texts/minutes/etc. When I was done, I had a truly free account.

However, when it came time to pick my phone number, there were no Alaska numbers available, so I had to pick a number from Seattle instead. Not having a local number makes it difficult for land line callers, but really doesn’t matter for cell phone callers.

I will say, though, after inserting the sim card, it picked up service right away, and loaded the APN information for me. So, it does actually work in Alaska.

Okay, so there is always a catch. Like any other business, they want your money. In this case, they are not lying, though. You don’t have to pay anything month to month, provided that you don’t go over your minutes/texts/data. But in the activation, they took $10 for the “top up fund” that will automatically buy more when you run out. So if you are very careful, the plan is free.

But I was still concerned. I’m throwing this card into other phones, or flashing custom ROM after custom ROM, and so setting the data limit on one ROM or phone was not going to keep me safe. I wanted to make sure that I would not endure any future charges.

I looked around online, and found that you can go to the web site for your account, and turn off the top up feature. However, when you do that, you have to (by way of accept or cancel button) accept the “Safety Feature”. The safety feature costs about $7 per month. Here’s the catch:

If you turn off top up, and accept the safety feature. Then you can immediately go to your billing section and opt out of the safety feature. You still lose the $7, and you have $10 of credit in your account that you will probably never get back. But, once you do that, your account is not only free month to month, but you also will not go over your limit, supposedly, you will just run out of minutes/texts/data for the month, and have no usage until the next billing cycle. 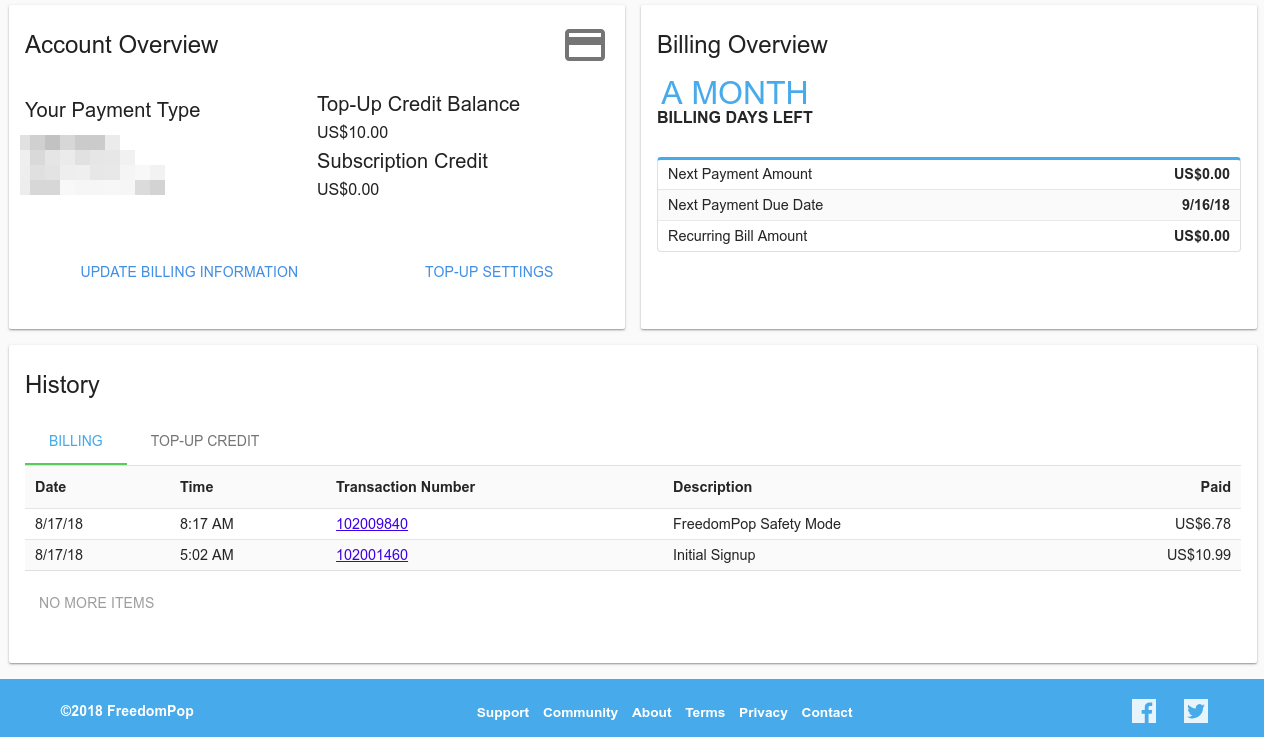 Here you can see my completely free month to month bill after paying $18 in fees.

One other downside to this setup is the app. Don’t get me wrong, the app seems to work great. What I mean by downside is that you need to use the app to send a text, or calls. I did test it out, and you can dial from the normal dial app on your phone, but it will then switch once you call to this app. Also, sending and receiving texts are done through the app.

Don’t get me wrong, the app seems to work great. I have had zero issues with the app. But here are a few downsides for me and my phone testing work:

One question that begs to be asked is how far does this get you? In my testing thus far, I’ve found that if I use the WiFi at home and at work, I do not lose any data. However, visiting one web page without the WiFi on used up 20 mb of data. That’s right, one web page, with one view of it cost me 10% of my monthly allotment. With rates like that, a 30 minute “binge” of internet while outside of WiFi range will probably bring you to a halt for the month.

As for minutes, I don’t spend that much time talking on the phone usually.  Yesterday, on my regular cell phone with unlimited talking provided, I spent a total of 9 minutes on the phone between two calls. The day before I was only on the phone for 2 minutes. So for me, the minutes might actually work. If we take 10 minutes as an average per day, though, and multiply that by 30 days in the billing cycle, then you end up on the phone for 300 minutes, which means the last week of your plan you wouldn’t be able to talk to anyone.

Texting is another matter entirely. It’s only 9 AM, and I’ve already sent/received 24 text messages. Granted, I get up at 4 AM, so that is 5 hours. Some are work related, others are not. Either way, by the end of the day, I will likely have 75 text messages. This gives me six and a half days of texting. That just will not do for a daily driver. At least not for me.

So is it free? So far, yes. Is it great for the average user? Well, if you are always near WiFi, don’t talk to much on the phone, and only send texts every now and again, then I suppose so. But there are alternatives to stretch this out further…..

Stretching It Out With Alternatives

I can think of several ways one might stretch out the use of this FreedomPop service while keeping it free:

Use the WiFi of your local work and home, and pair it with free apps for chat or messaging services.

In theory, if you use something like Jabber, XMPP, or similar apps, like TOX, you could “text” people via instant message, which will not cost you anything as long as you stay on the WiFi. In some of these apps, there are options to video chat with someone, which is a lot like making a phone call. Some of these apps even allow VOIP phone calls themselves. However, these features may or may not cost money for their services. I’m sure you can find a few free ones though.

Use more than one FreedomPop sim card

Another option is using more than one FreedomPop sim card. With multiple cards, you may be able to swap between them, but this makes it very difficult to receive a call, as no one knows which one you are using. I haven’t tried it, but it seems logical, though not practical.

One of the phones I am working on has two sim card slots, but since you use the app to control usage, I’m not sure you could put both into one phone and actually make it work.

After I got started with this, I found a website devoted to getting the most free out of your FreedomPop account, you can find it at FreedomPop For Dummies.

We will have to see how well it works out over time. It’s not quite what I need, but it is great for just checking that the radio interface layer of the phones that I’m testing do work, and I can do a quick data test to make sure the internet works as well while working on my cell phones.

FreedomPop
By adminSeptember 5, 2018cell phone1 Comment on FreedomPop in Alaska? Does it really work for free?

One Reply to “FreedomPop in Alaska? Does it really work for free?”