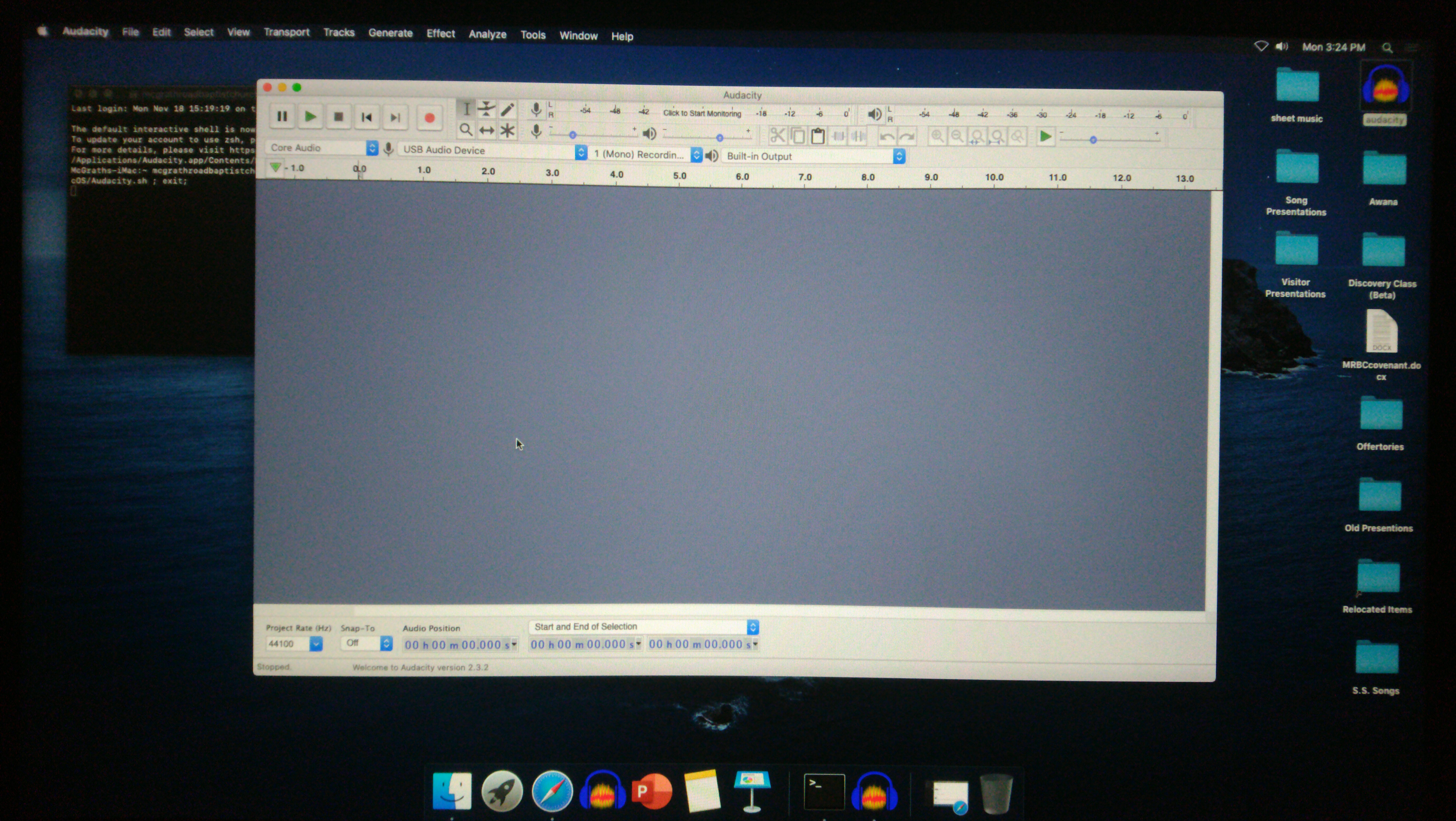 And the backstory: I do some IT work for a local church that I attend. They use a Macintosh computer in the sound room to record the sermon audio, as well as display projector images or songs, and the like. Recently, the computer automatically updated itself from 10.14 to 10.15, or what Apple calls “Catalina”.

Unfortunately, this caused a problem. The sound recording program, Audacity, still launched like normal, and looked like normal, but it didn’t act like normal. First, it couldn’t open any files from previous recordings to be edited. To make matters worse, it couldn’t record any audio. After fiddling for a bit, I decided to make sure we had the latest version of Audacity, and to my surprise, I found this article on their website outlining how Audacity was not compatible with the latest Mac version.

Ultimately, the issue seems to be a matter of permissions. Fortunately, someone had found that if you elevated your permissions by launching it from a terminal, you could make it work, or so they said. So, I opened the terminal:

And it launched Audacity, which is great, and even better, it would prompt for permission, but then allow you to record audio and view/open files from the computer. Great and more great. But, well, that’s fine for a keyboard ninja like myself, but what about the average user coming in to use the computer to do the recording? I can’t expect them to know how to launch the terminal and run these commands. If only there was a way to have a button or icon that they click on and launch Audacity properly? Oh, wait, there is, appify!

You can read all about the process on their website, but I’ll walk you through it.

Open the terminal. Conveniently, Mac’s are sort of butchered Unix, which is like Linux, so I was right at home….

That opens up Nano editor, and you can paste in the program:

Then press CTRL-x to exit, it will ask if you want to save this, so press y for yes.

Now, back at the terminal, we have to make appify an executable:

Once again, we are in the Nano editor, to which I put this:

Then press CTRL-x to exit, it will ask if you want to save this, so press y for yes. Which once again brings us back to the terminal window.

Now I have an icon in the “install” folder in my user folder. It had a weird icon, but if you double clicked it, a terminal window would open and Audacity would launch with the right permissions, all audio recording and file saving/loading worked! To fix the icon:

Now, my home brew icon matched the real Audacity icon. I simply removed the old Audacity icon from the dock, and dragged my new audacity app/shortcut that I made to the dock at the bottom of the screen, and it was now launch-able with one click!

That was a lot of work, but in the end, for the end user making recordings, they use it just like they did before. They click the Audacity icon at the bottom of the screen on the dock, and the only perceptible difference is the terminal window also opens in the background. Hopefully, Audacity will work things out with the next revision, but until then, they can keep doing their recordings.

One Reply to “Audacity on a Mac running Catalina”