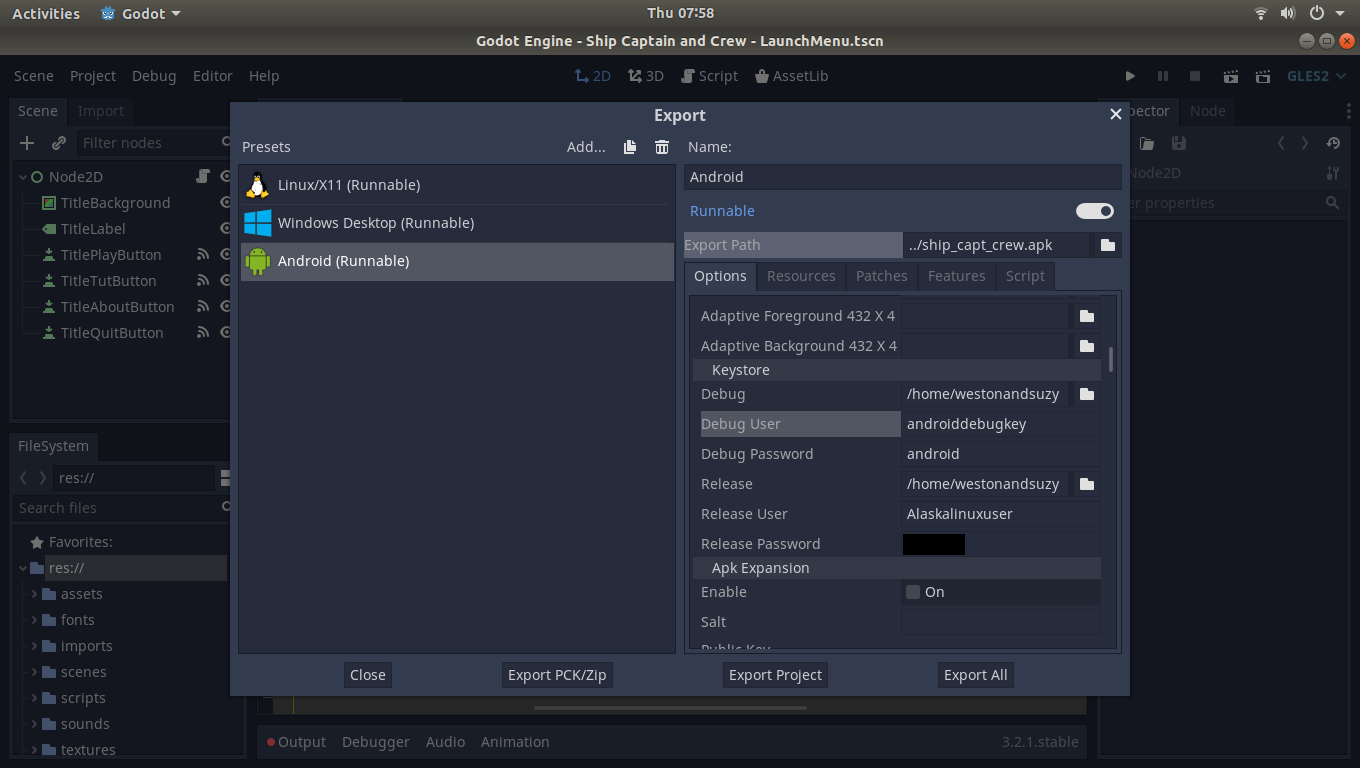 So, as I near completion of my 3D dice game, I ran into several small issues that I thought I would share here, since they all apply to exporting your game. Of course, as you go along, if you are making a cross platform game, you occasionally need to export it and test various things on the different platforms (more on that in another post). And when you export them, you have to use this export function and templates.

So, that said, a few interesting tid-bits:

First, I found it interesting that when you make a release key for your Android version of the game it saves your key password in a plain text file in your directory folder. Ordinarily, this wouldn’t be a terrible issue, except that as a maker of open source games, when I use git to sync my work, it then would save the release key in plain text on GitLab! So, if you are to the point where you stop using debugging, and start using release keys that you made or signed, you will have to do the following:

Or, you can delete your password from inside Godot, in the exports screen by scrolling down to it and deleting it and saving the project. I find this to be a bit annoying. I would think Godot would at least hash it, or something. Or keep passwords in another file, specific for Godot, and not in your project folder. But that’s just me, I guess.

Second, if you are making an Android version of the game, you will need an icon. By default, it uses the icon you already have for your game in the main project folder, called “icon.png”. But if you don’t specify an icon for the Android game, your main icon will come out looking wrong (way zoomed in) on your Android device.

After some reading, I found that you need to supply one 192×192 pixel icon, which Godot will then translate into the various other icon sizes. But, this didn’t work. I found out later that is because in Android 8+ you need 432x pixel icons. So, in all, you will need several icons, each used for different launchers. Or, carefully edit your main icon and it will be used in a fallback chain and edited by Godot to make your icon for the Android application.

Third, I ran into a lot of problems with key signing. I’d like to point out that in the guide it says that you set the debug key in the editor settings. This is true, and without that it will not work at all. That said, with that, it will not work at all either. At least for me. I had to also specify in the project export template for the Android app the paths to the debug keys again. Otherwise I got an error about “jarsigner” failing. Overall, this is only a minor inconvenience, but it was a big hang up for me until I figured it out. You then have to remove all of that and enter you release keys if you want to make a release version.

Just a few thoughts from a guy who doesn’t really know what he’s doing, so take it with a grain of salt. But, if you run into the above issues, be sure to try these out. Also, you can check out the full code for my game here on my GitLab.