Occasionally, I do a theme, or idea, on a given day for a period of time. Currently, I have been spending quite a bit of time working on chess engines and their play. So, I am going to create a “Fool’s Mate Friday” post. That’s right, every Friday, I’ll be bringing some small tidbit about programming chess engines, or chess games, or chess play in general. So, stay tuned for Fool’s Mate Friday!

This does bring up two important questions, though:

#1. What is a fool’s mate? Well, a fool’s mate is technically a check mate that happens in 2 moves. However, by extension, it can be used to refer to any set of opening moves that lead you to a checkmate very early in the game. Typically, it is specifically a reference to being checkmated by making poor moves on the fool’s part, rather than tactful moves on the winner’s part. 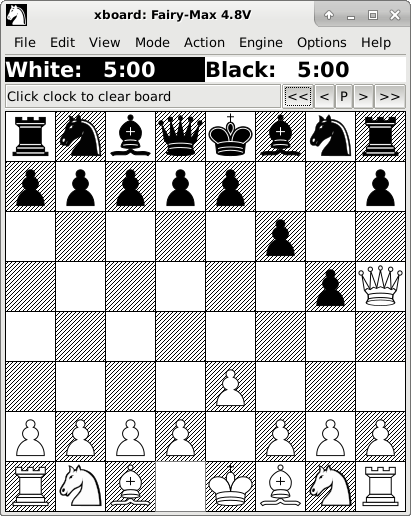 #2. Why name it “Fool’s Mate Friday”? Two reasons, really. I needed a chess related term that started with F, and this is fairly accurate, as I am an unrated player of low standing (and understanding) in the game of chess, and my programming skills are not that good yet. Both of these lead me to make many mistakes, both in the game and in the programming thereof, which is certainly on par with the fool’s mate.