I was really excited as an Android developer (probably an insult to real Android app makers, but I try…) when I heard about MechDome. If you read any of my earlier posts about MechDome, you can see that it is a really neat converter, which takes your finished APK, and turns it into an iOS program for iPhones. That in itself is pretty cool. One thing they also did, was create a program for open source users, making a purchase cost of $25 per open source app which is converted. 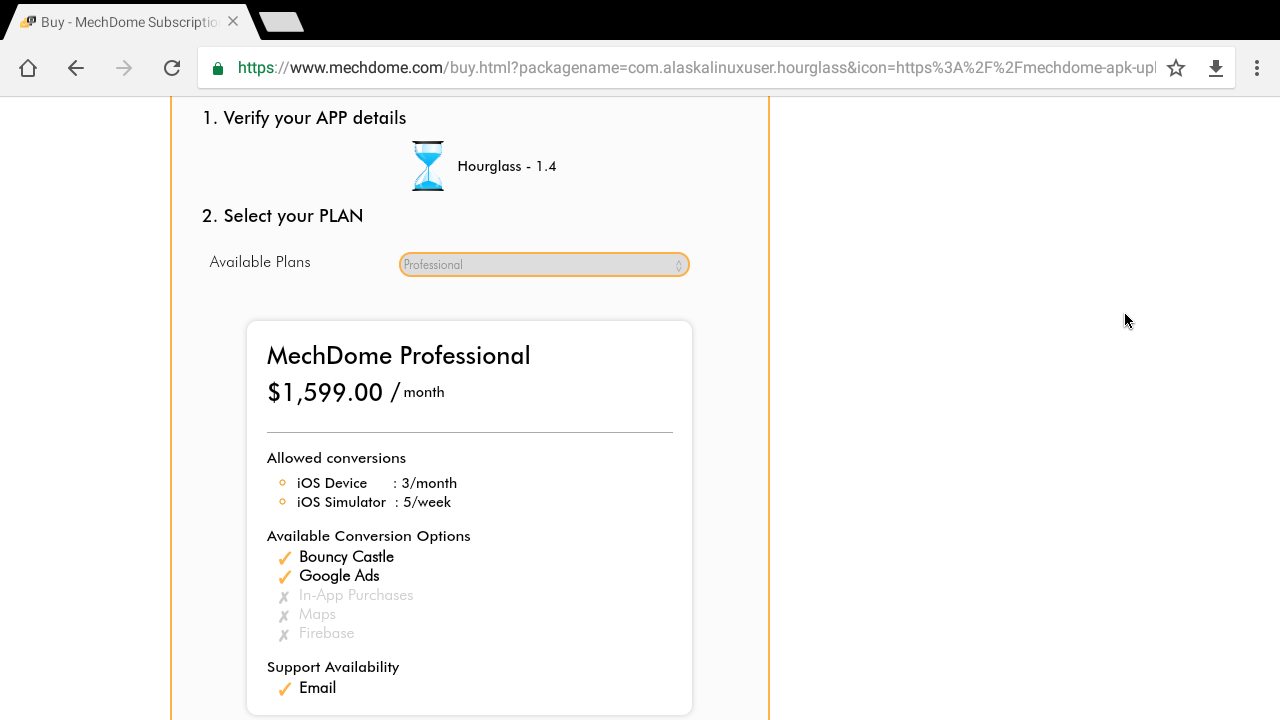 Recently, they have opened up their website and now are allowing subscriptions to be purchased by developers who wish to convert their apps. Unfortunately, it looks really expensive. According to the displayed price when I checked on my open source app, having a Pro subscription costs a little over $1500 per month! That is quite a bit more than I was thinking. Certainly way more than I was hoping for when it came to prices. Actually, I’m not really sure that I know any groups of developers that can afford that price.

At a cost of $1599, per the advertisement, you can convert one app 3 times per month, and up to 5 times per week in the simulator. Essentially, you can test it every workday in the simulator, but only 3 times a month can you actually convert your one app to a file which is useful on iOS devices. These guys are really, really smart, but I’m not sure that is going to work.

There is a “basic” package, however, it is not selectable for me when I click on it. That says to me that it requires me to put in my credit card information first, or that option is not available yet. Either one doesn’t bode well with me. Presumably, since the Pro package is 3 conversions per month, the basic package must only be one conversion per month, or perhaps a one time, one conversion cost.

Consider a few metrics in the finance department: If your app sold for $1.99 on the Apple store, you would need to sell 800 app downloads per month, and that only covers your MechDome expense, let alone the Apple play store fees. If you are banking on add revenue, with a HIGH revenue of .10c per playtime in advertisements, you would need 159900 people to play your app every month just to break even.

If you consider the yearly cost, you are planning to pay just under $20000 per year for that app to be on the Apple play store. If you took that $19, 200, you could easily pay for an app to be converted the “old fashioned” way, and then have all of the source code available for future work. If you use MechDome, and ever decide to stop, you are out all of your money with no way to continue development.

There certainly are apps out there that easily meet that criteria. Big apps will probably quickly overshadow that market. However, if you have an app that generates that much revenue, then you probably want to hire someone, or a team for iOS development. Mainly because there are some quirks with the converted apps. For instance, in my simple app tests, some of the colors are not the same in the converted app. If you are designing a big ticket app, then you will have a team of people making sure that your app looks “just right” on iOS as well. Let alone that you can’t use certain types of resources or libraries in your app, like libGDX, the graphics engine used in tons of games.

To be honest, I thought MechDome would have the best market share targeting midrange to low range applications. Apps that are too small to have a full iOS development team, but that are big enough to generate revenue on an iPhone market. This may sound laughable, but I was figuring on prices that were much cheaper, something in the $300 range. Actually, when I saw the price, I thought that was a Pro account price for multiple apps, but $1600 per month for just one app?

I’ve been wrong before, though. I only have one app that garnered more than 800 downloads, and that certainly is not per month! And my app was free! It just seems to me that if you have a great app which is making you enough money on Android that you want to put it on iOS, you could take this huge chunk of money and make much wiser decisions with your resources. It is a bummer, because I still think MechDome is one of the coolest tools/ideas of the decade when it comes to mobile app development.

I do still appreciate that they have reached out to open source developers with a one time conversion fee of $25, because that seems pretty reasonable. How well will their pricing work out in the future? Well that remains to be seen, but I wish them the best, I certainly would not be able to afford their new prices.

AndroidappsiOSmechdome
By AlaskaLinuxUserSeptember 21, 2017appLeave a Comment on MechDome just got a whole lot more expensive….